Below is a summary of YE1C’s Data and Evaluation during contest of CQWW 160m CW, 2011 from Gunung Malang (+1.050 ASL) Ciater, West Java. It’s completed with several photographs (by Jo, YC0LOW) and graphical statistics (by Joz, YD1Z). The information written here is intended as official report for Orari West Java since the YE1C is their CW contest club.

In order to clarify, on behalf of YE1C team, I put some comments and/or suggestions, comparison etc. with YE1C previous operation in the same contest, 2010, written in parentheses (*).

Analysis and DX reports during pre-contest had already been written and published in a serials in OrariNews mailing list.

Several calls from the U.S. are from contest stations. They are rather passive in QSL-ing. I suggest to the YE1C manager to send first the card in order to be able to complete the collection of 160m, CW cards. For example, 160m stations from UT, TX, AK, NV are definetely rare audible in Indonesia.
Decreasing numbers of QSO with U.S. stations were due to poorer propagation than it was in 2010. In the contest days this year, sun rise enhancement – a natural phenomenon – did not exist here.

2. Propagation during the contest.

Propagation to JA-land was drastically deteriorated, this year. In contrast to 2010 where YE1C logged 122 JA stations, we made only 24 in 2011. Had in 2011 YE1C captured just 50% of the total amount of JA stations in 2010, the final score would have been more difficult to break by any other stations in Indonesia.

Also, the operation is supported by several other factors, such as:
1. Features on the Icom IC7800 transceiver (built-in digital filters for rx, 4 rx inputs, etc.).
2. Linear Amplifier Emtron-3DX (legal limit) that worked flawlessly.
3. Homemade TX dipole antenna with feedpoint installation at ideal height at 45m.
4. Human Resources – mainly members from Orari, Lokal Bekasi, West Java, are all experienced at setting-up (RF equipment, electricity, accesories, computers) for contest (formerly team of YE1ZAT).
5. Adequate time of preparations for installment, the orientation, re-orientation and performance evaluation of quite many rx antennas.
6. An experienced CW operators (very comfortable with severe intermod CW tone, hi-speed)
7. The understanding of the mechanism of propagation 160m, softwares, analyzer and modern tools based Information Technology.
8. Supports from ORARI members who visited us (from Subang, Bandung, Bekasi etc.). Some are even willing to help us – while in sleeping – in repairing minor damages to the RX antennas at no cost (TNX to Buce YC1BAH, Nyoman YB1NWP and Aris, candidate member for the Bekasi) 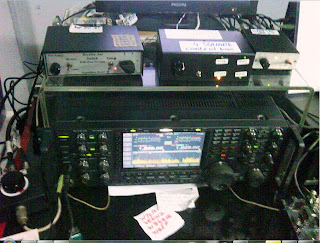 Figure 1. Some of the RX antenna distributor box above the IC-7800.

First time tested in Indonesia. The installation is very practical because the feedpoint transformers (see Figure 2) for both directions (N-S) can be localized at the same point.
Twisted pair wire for antennas using WD-1A (used by U.S. troops in Europe during World War II) being extended in the direction 330 degrees to 150 degrees (to Europe and VK/ZL directions).
Twisted pair wire length is 238m (780ft as suggested by the maker: Gary, KD9SV, via emails). Average wire height is 1m. Located 154m away from the TX antenna. Thus, the length of RG-6U coax feedline (75 Ohm) should be doubled for two wire antennas connected to controller DXpedition Model II box from KD9SV, at hamshack. We used almost 900m RG-6U for feedlines.

At the preparatory stage, we changed the layout of this Beverage (from west to east into the north and south direction).That is because we found out higher noise floor level coming from power lines which is only 15m away routed parallel to the installation of a Beverage wire antenna to the west and east.
Later, the Beverage wire antenna was stretched out perpendicular to the power line. Immediately the noise level decreased. It performs even better when the feed transformers is put in new spot – far away from the towers and the TX antenna.

Because the antenna wire is floating above the contours of the valley, we could receive low angle signals (about 30-40 degrees, elevation). This antenna captured a lot of European signals. Tery, YC1KAF, operator, said that the noise in the antenna is much lower than on home-made Beverage antenna (30 degrees, azimuth). In all of our rx antennas, noise floor level is averagely S0. Only occasional static crashes that could pump up the S-meter to S3-5! Although we have had previous experience to build Beverage in our city-lot QTHs, most of us in the team never had such low noise experience.

b. Single Wire Beverage Antenna made by Danu, YD1GCL (yd1gcl.danu@gmail.com)

The wire was deliberately elevated higher than the wire of reversible Beverage (see Figure 4 and Figure 5).
Based on the our experience in 2010, arriving signals from the JA-land (distance around 5000-6000kms) would always be strong even before the Sun Set (GMT) in Mount Malang. According to theory, at such times, the signal will come to us at higher angles. Apparently, the conditions of propagation to JA so bad that our forecast did not happen, but we felt there was nothing wrong with the plan whatsoever. This antenna is working optimally.

On several occasions, EU signals were skewed. The 30 degrees Beverage received better than the antenna 330 degrees. At least it reduced the CW tone severe intermodulations. This is found when I woke up and saw Joz, YD1JZ was on duty in the early morning. His ability to choose the correct rx filters, band pass tuning etc. on the Icom IC 7800 appropriately combined with the direction of the RX antenna had produced an optimal readability, weak signals were easily copyable.
Danu, YD1GCL, still stock some homebrewed feed transformers (9:1 Z) for the single wire Beverage that he never used.

The full array system (vertical antennas, preamps, field control box, phasing delay lines, in-house controller, etc.) is also for the first time installed in Indonesia (see Figure 6). In our emails correspondence, Lee asked my reports of the usage. He mentioned, generally on MF, arriving signals in the equator zone is high angles. Where in more northern and stable area like in the U.S. and Europe signals travelled in a low angles.
On the advice of him, YE1C also installed full-sized low dipole with feedpoint as high as 10m above ground level, for RX.

Figure 7. Layout 4-square RX Antenna Array
We designed directions for the four elements array (in degrees) below. Identification on each array elements were numbered in sequence #1 to # 4 and made identical with the switch positions on the control box on hamshack (clockwise) so that the operator will not be disoriented in controlling it (see Figure 7, above).
1. north = 0
2. east = 90
3. south = 90
4. west = 270

This direction settings were designed to make the east and west elements as our default “ears” to receive signals from the Pacific and Africa. Unfortunately, during the contest, we did not hear the signal from Africa. Although, in the previous week we knew from the internet that K3QF operated XT2RJA (Burkina Faso, Africa) on 160m CW. According to my notes since 1997, this is the first time a station from XT2 QRV on topband.

Below is a plot of elevation of each element to 160m (from EZNEC) with a distance of 24.5m each side
Four directions of signal reception were very distinguishable when the control at hamshack is switched to the desired positions. Good indication of front-to-back ratio. We obtained this by monitoring the AM BC on MW band. So, since mid-day we already convinced this antenna works well. 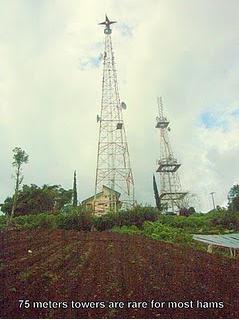 Being temporarily in enormous tea plantation area, we were lucky to have been able to explore the characteristics of both types of RX antennas in Mt Malang. For us, the Beverage antenna is magical because of its simplicity, but demanded estates. Whereas the 4-square rx antenna array from Hi-Z is innovative – a today’s optimum solution for topband DXer/contesters who lived in city lots. We firmly believed, both types can NOT be compared in apple-to-apple approach because of their different characters and the way they works.

The author had a chance to build the 80/160m coaxial loop RX antenna as derived from Rick, N6RK, concept. The height is 1 meter above the ground, and is located in QTH backyard, at 45m away from the TX antenna. 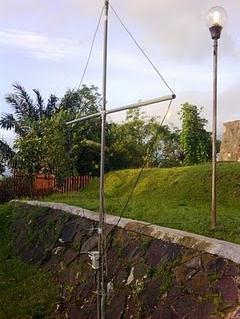 Although it worked well, this antenna (Figure 12) was never used by operators YE1C because they preffered other RX antennas that provided them with more gain.

It is very true when the elders topbanders warned us that “you can not have too many receive antennas.” The meaning of that sentence is very wise. That said, do not become greedy operators who bought up all the DX at 160m, then soon go to retirement for DXing. However, it will also be difficult to implement too many rx antennas in a contest that demands other priorities.

In Mount Malang, West Java, I further understood that there are big differences in qualifications of being a DXer and a Contester on 160m. Gentlemen, what’s your position?