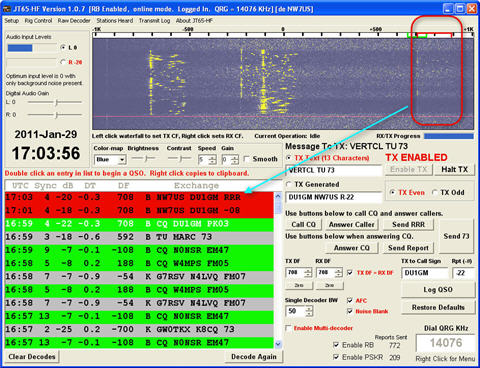 Introduction to a weak-signal digital mode
Have you ever wondered how much of the noise you hear on the HF bands is actually comprised of signals too weak to be copied? JT65A is a weak-signal digital mode that allows you to pull great DX out from under the noise on the high frequency spectrum. The JT65A communications protocol was conceived and first implemented by Joe Taylor, K1JT. Joe, a Professor Emeritus of physics at Princeton University, shares a Nobel Prize with Russell Alan Hulse (ex-WB2LAV) for the discovery of the first pulsar in a binary system as well as the first confirmation of the existence of gravitational radiation in the amount and with the properties first predicted by Albert Einstein. Joe has contributed to the amateur radio community in much the same way, changing the playing field for weak-signal operation.
JT65A is actually a “sub-mode” of Joe’s original JT65 protocol, which he designed to optimize EME contacts on the HF and VHF bands. JT65 includes error-correcting features that make it very robust, even with signals much too weak to be heard. It was later realized that this protocol, with some adaptation, would also be very usable for terrestrial HF communications.
Join the Facebook community for JT65A here: https://www.facebook.com/jt65mode
This is a WEAK-SIGNAL digital mode! – You should not run much power, at all. Many amateur radio operators have worked the world with a simple dipole antenna and 20 watts. Some have done it with less power. You simply should NOT be running 100 watts, UNLESS YOU ABSOLUTELY HAVE TO! By running at 100 or greater power, you MAY cause intense interference to all of the other stations on the same frequency, countering any possible benefit of using this mode! DO NOT RUN HIGH POWER UNLESS YOU KNOW FOR CERTAIN THAT YOU CANNOT COMPLETE THE TWO-WAY CONTACT WITHOUT LOWER POWER! USE ONLY THE POWER NECESSARY TO COMPLETE THE CONTACT! The method suggested is to start all calls with lower power, and only increase the power if you must. Most operators start with 5 to 20 watts. They only increase the power if no contact is made!
It is true that on some bands, under certain propagation conditions, the contact can only be accomplished with 100 watts of power. However, it is also true that under many conditions on most HF bands, it is often demonstrated that lower power has been sufficient to accomplish amazing results. THIS MODE IS DESIGNED FOR WEAK-SIGNAL DETECTION AND SUCCESSFUL TWO-WAY COMMUNICATION!
How much power do you really need to transmit, with JT65A? Here is a calculator to help you figure that out, based on the reports you receive from other JT65A stations.
Here is a list of common JT65A frequencies:Freq kHz / Sideband / Note 28076.0 / USB 24920.0 / USB * note 3 * 21076.0 / USB 18102.0 / USB 14076.0 / USB 10139.0 / USB * see note 1,2 * 7036.0 / USB (International) 7039.0 / USB (Typically Europe) 7076.0 / USB (USA) 3576.0 / USB 1838.0 / USB 1805.0 / USB
* Note 1 * Do not use 10145-10150kHz because JT65A is NOT COMPATIBLE with PSK31, MFSK, or RTTY and the other fast time-sharing modes such as PACTOR, ALE, PSKmail, and APRS.
* Note 2 * It is becoming a standard practice on 30m to actually use 101378 kHz as the window frequency (USB), to play ‘nice’ with WSPR stations. This, of course, is an issue with certain countries/regions where digital operation is not allowed below 10140 kHz. However, most JT65A appears to be shifting to 101378 for a window (dial) frequency. This issue with the frequency problem between IARU regions needs to be resolved. I will update this when new information is available.
– NOTE 3: Per discussion amongst the JT65A crowd on the reflectors: There is discussion about moving the 12-meter window frequency, USB to 24927. THIS IS A PENDING ISSUE: Those amateur radio operations in Region 3 must operate at 24920 to 24929. Discussion is currently underway to resolve an issue with using 24920 KHz (PSK-31 since 1999). I will update this list as soon as a new concensus is reached. (last updated October 1, 2011)
Special Two-Part Article Published in CQ Amateur Radio Magazine
David Witkowski (W6DTW) and Tomas Hood (NW7US) co-authored a two-part article that was published in CQ Amateur Radio Magazine in October and Novemember 2010 that explored JT65A and the JT65-HF Software. You may download the two PDF files, below.
Download links:
Part 1 – JT65A and JT65-HF Software
Part 2 – JT65A and JT65-HF Software
Please follow me on Twitter:
Twitter Search for ‘#jt65 OR #jt65a’ hashtags:
The JT65A digital HF mode (Amateur Radio)
JT65 or JT65A