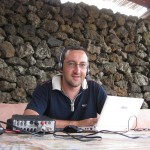 Andrea, IZ2LSC
Hi Folks,
I’m going to spend my summer holidays in Mexico and as usual, when the location deserves ham radio interest, I will bring with me a barefoot equipment to be active on HF bands (see my past activities on myQRZ.com page).
This is not a Dxpedition, but only an holiday style operations. However I will try to be active as much as I can, without taking too much time from my family, to give to everyone the opportunity of a QSO.
I will spend two weeks touring around the mainland and a week on the “Isla Mujeres”. If the accomodation will allow it I will try to setup a vertical antenna also from the mainland, but primary goal is to be active from the island, as it counts for IOTA award and seems to be enough demand. According to RSGBIOTA website the Island has been credited to only 31.6% of participants.
I have a good location, on the beach on the Caribbean side of the island, so I hope to catch all of you on the frequiency and put a lot of QSOs in the log.
You can get in touch with me using the contact form.
If you like this and feel to give me a little contribution, here there is the donation page
vy 73
Andrea, IZ2LSC
P.S. Contribute to the media section of this website by sending your recordings (see here).

Official Logo
Isla Mujeres (Spanish for Women Island) is one of the ten municipalities of the Mexican state of Quintana Roo. The municipality, located in the northeastern corner of the state is mostly on the mainland and has a municipal seat of the same name; Isla Mujeres. The municipal seat is a small island town a short distance off the northeast coast of the Yucatán Peninsula in the Caribbean Sea about 13 kilometres (8.1 mi) northeast of Cancún. The island is some 7 kilometres (4.3 mi) long and 650 metres (2,130 ft) wide. In the 2005 census, the town had a population of 11,147.
Mayan History
In Pre-Columbian times the island was sacred to the Mayan aged goddess of childbirth and medicine, Ix Chel. When the Spanish arrived here in the 16th century they named it “Isla Mujeres” because of the many cult images of goddesses here. But the first news we have about Isla Mujeres are from the period between the years 564 – 1516 AC, when the island was part of the mayan province called Ekab (there where 4 mayan provinces in what is today the State of Quintana Roo). Since then, the island was considered sacred by the mayan civilization, therefore, this was not a mayan village where to live in, but a sanctuary dedicated to mayan goddess Ixchel. Besides this, the mayan also exploited the salt that the 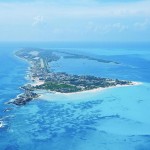 Aerial view
island produced in the “salinas” (small interior lagoons) that back in those times, the salt was used not only for the conservation of food and medicine but also has a generally accepted currency for commerce of goods along the whole mayan region. The Mayan goddess Ixchel had a temple in what is today the Hacienda Mundaca (Mundaca’s Plantation House). There was a small Mayan temple on the south tip of the island, however in 1988 Hurricane Gilbert caused extensive damage to it, leaving most of the foundation and a very small portion of the temple. Since the 1970s along with Cancún there has been substantial development for tourism in Isla Mujeres.

Map
Source: Wikipedia
Equipment
My Equipment is:
Yaesu FT-857D (100W)
20 m – 6 m: Vertical Dipole Antennas
30 m: 1/4 wave vertical antenna
Home made digital modes interface
Heil Pro-Set headset
Switching PSU
NetBook with N1MM
QSL Info
Please carefully follow this QSL policy:
Direct QSL is via EB7DX. Info HERE
Buro QSL is via my homecall (IZ2LSC).
The logs will be also uploaded to LoTW.
Donation
As you know, organize a mini DXpedition is not cheap.
As instance the cost of the extra baggage weight (Blue Panorama Airlines will charge 18 euro per every 1Kg over the 20Kg), and the cost of the license.
I do that primarly for my fun, but if you wish to contribute voluntarily now you can.
This will help me also organizing further mini dxpedition. Even small donations are welcome. To the donors present in the log will be sent a direct QSL card (if the donation is greater than 2 USD).
DX Club DX News dxpedition Indonesian Amateur Radio IOTA iz2lsc mainland orari Organisasi Amatir Radio Indonesia YB Land DX Club ybdxc 2013-07-19
Administrator