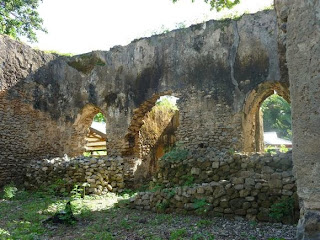 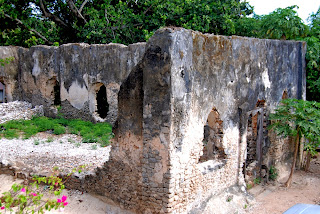 OK, many thanks for the information. We are amending the Directory listing for OC-272 to include Kisar Island and deleting it from OC-246. 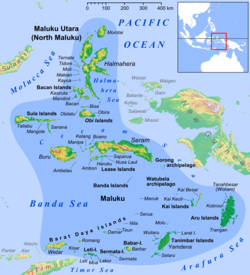 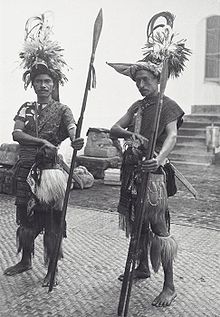 Kisar warriors.
It is located to the northeast of Timor Island in an area of active tectonics.[2]
The Oirata language,[3] (closely related to Fataluku) and the unrelated Kisar,[4] a trade language (also locally known as Yotowawa or Meher), are spoken here.
The Timor Monitor (Varanus timorensis) is found in Kisar.
History[edit]
1665 the Dutch VOC built a military base and named the island after the Kisar word for white sand. From the European outpost on Kisar a relatively large Indo Eurasian community developed named the ‘Mestizo from Kisar’ to this day their descendants live as Rajas and chiefs on Kisar. Surviving family names include: Joostenz, Wouthuysen, Caffin, Lerrick, Peelman, Lander, Ruff, Bellmin-Belder, Coenradi, van Delsen, Schilling and Bakker.
In 1795 Kisar was under English rule, in 1803 it was under Dutch/French rule and in 1810 again under English rule. 1817 Kisar was returned to the Dutch until the outpost was abandoned in 1819. After that time Kisar upheld close ties with their Portuguese, Topasses and Timorese neighbours on Timor.
After WWII and Indonesia’s independence the island was temporarily considered part of the segregated RMS, but ultimately became part of the unitary Indonesian state.
Nobility[edit]

Southwest Maluku , before the 1823  , precisely at the time of the Dutch East Indies by the name Onderafdeeling Zuit Eilanden Wester is part of the Residency of Timor , located in Ilwaki , Wetar Island . Its territory covers Kisar Island , Wetar , Lirang , Romang , Damer , Leti , Moa , Lakor , Luang and Sermatang Island .

The breakdown in relations with the residency Timor occurred in 1925 , when Onderafdeeling Zuid Wester Eilandon transferred to Resident Maluku ( Residentie Molukken ) . Diversion , followed by changes Onderafdeeling Zuit Wester Eilanden to Assistant district officer , who ruled in 1928 beneath an Assistant Bestuurs power Plaatselyke Bestuur van Hoof ( HPB ) in Wonreli . In 1947 , then made ​​Onderafdeeling own .

The Maluku Islands within Indonesia yellow: North Maluku province red: Maluku province
The Maluku Islands or the Moluccas /məˈlʌkəz/ are an archipelago within Indonesia. Tectonically they are located on the Halmahera Plate within the Molucca Sea Collision Zone. Geographically they are located east of Sulawesi, west of New Guinea, and north and east of Timor. The islands were also historically known as the “Spice Islands” by the Chinese andEuropeans, but this term has also been applied to other islands outside Indonesia.
Most of the islands are mountainous, some with active volcanoes, and enjoy a wet climate. The vegetation of the small and narrow islands, encompassed by the sea, is very luxuriant; including rainforests, sago, rice and the famous spices—nutmeg, mace and cloves, among others. Though originally Melanesian,[1] many island populations, especially in the Banda Islands, were killed off in the 17th century during the Spice Wars. A second influx of Austronesian immigrants began in the early twentieth century under the Dutch and continues in the Indonesian era.
The Maluku Islands formed a single province since Indonesian independence until 1999, when it was split into two provinces. A new province, North Maluku, incorporates the area betweenMorotai and Sula, with the arc of islands from Buru and Seram to Wetar remaining within the existing Maluku Province. North Maluku is predominantly Muslim and its capital is Ternate. Maluku province has a larger Christian population and its capital is Ambon.
“Spice Islands” most commonly refers to the Maluku Islands and often also to the small volcanic Banda Islands, once the only source of mace and nutmeg. This nickname should not be confused with Grenada, which is commonly known as the “Island of Spice”. The term has also been used less commonly in reference to other islands known for their spice production, notably the Zanzibar Archipelago.
Etymology[edit]
The name Maluku is thought to have been derived from the Arab trader’s term for the region, Jazirat al-Muluk (“the island of the kings”).[2]
Administrative divisions[edit]
The Maluku Islands were a single province from Indonesian independence until 1999 when they were split into North Maluku and Maluku.
North Maluku province includes Ternate (the site of the provincial capital), Tidore, Bacan, Halmahera (the largest of the Maluku Islands)[3] Morotai, the Obi Islands, and the Sula Islands. The residual Maluku province includes Ambon (the site of the provincial capital) and the other Lease Islands; the much larger islands of Seram and Buru; the smaller islands lying south and east of Seram—the Banda Islands, Gorong Islands, Watubela Islands, Kai Islands and Aru Islands; and in the far south the Babar Islands, Damar Islands, Romang, Kisar, the Leti Islands, Tanimbar Islands, and Wetar.
View Larger Map
Equipment
YF1AR/8 Radio Yaesu FT 450D with tuner FC 707 power 100W
Antenna Vertical Dipole 40 m band and HB9CV 20-15-10 m band
YB4IR/8 Radio Kenwood FT950 power 100W
Antenna G5RV 40 m band and Mini Multi Yagi  20-17-15-12-10 m band
Mode mainly on Phone as well as on CW n Digital
QRV 10m – 40m band
QSL Info :
special qsl card design for dxpedition will be issued
YF1AR/8
QSM via N2OO Bob Schenck
www.yf1ar.com
www.qrz.com/db/yf1ar
http://www.qsl.net/n2oo/history/qsl-n2oo.htm
YB4IR/8
QSM via Homecallsign
www.qrz.com/db/yb4ir
this is logsheet of YF1AR/8 and YB4IR/8, even the header is YF1AR/8
Donation
please use yf1ar@yahoo.com for Paypal account