If you listen to the DX activity on the Low bands, you’d be forgiven for thinking that you’re wasting your time unless you have a 4 Square Array, 20 acres of Beverage antennae, a huge Amplifier, and a neck like an anvil..

We probably aspire to having the lot, but thankfully, we can do a passable job without any of them.  Those of us, who live in average homes, with average sized gardens, and small to average bank accounts, can be surprisingly successfull on the Low Bands, once we understand what the minimum requirements for success are..

Really, The main area of importance is the antenna farm…!!

On the higher bands, the same antenna is usually used for both TX and RX .  The Low Bands are different, in that one good TX antenna is probably adequate.    If the TX antenna is relatively inefficient, we can compensate by using more power.  But for RX, we require antennae that  have the very best signal-to-noise ratio (SNR) that we can muster.  It is also very advantageous if these antennae are directional. Sensitivity in the RX antenna is not really that important, so long as the SNR is excellent…..A good low noise amplifier (preamp/LNA) can give us all the sensitivity that we need.

First of all I must qualify my remarks by stating that ALL antennae benefit from a good ground under them. ( except the Beverage… “The exception proves the rule” )

One area of my garden has lots of radials, buried wire mesh etc.. I have run many verticals on this site of various types… 1/4 w/l verticals, inverted Ls…trapped and otherwise, and they all worked well. The Verticals have never been more than 50ft high, so various forms of loading have been used to bring them to resonance. Typical of these would be my  80&40mVertical .  Being a fan of L B Cebik W4RNL and his excellent site at Cebik.com , I learned that the MOST efficient form of loading was “capacity hat” loading. I built various antennae using this method, and they were the most successful 1/4 w/l verticals that I’ve ever built.
I found an interesting project on LBs site consisting of a triangle of three vertical Dipoles . Shortly afterwards I discovered Don K2KQ’s excellent antenna which he calls his Double L  . This is probably one of the quickest lowband antennae to deploy, and is very effective. It does not have the overhead null of the typical vertical, but is a good DX antenna, and can also be used for relatively local QSOs.

I then ran across “Another Way to Look at Vertical Antennas” by  Rudy Severns N6LF (March 1999 QEX)… This was the “icing on the cake” … Not alone had Rudy got all the practical stuff that I needed in the article, he also had the  gain figures for his vertical dipoles compared to traditional ( 1/4 w/l) verticals …Interesting reading..
(A drawing to show the progression from standard dipole, to Capacity hatted, end loaded, vertical dipole)

As the Capacity hats get larger, the resonant length shortens

You can see from this, that my 50ft “H”  has almost exactly the same bandwidth and peak angle as the full size 1/4 w/l vertical, and the gain is only down by .5 dBi.. 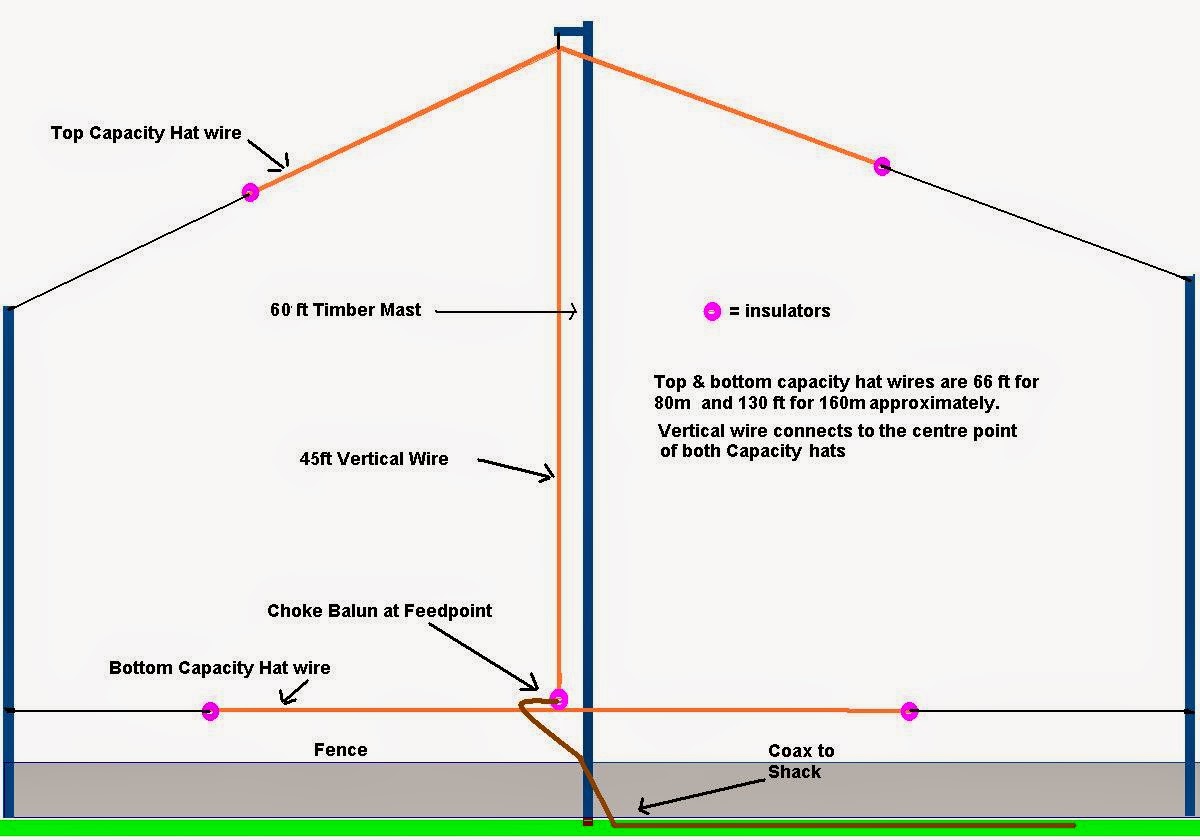 I have come to the conclusion from my experiments, readings and observations, that a capacity hatted vertical dipole, a few feet over ground, is LESS COMPROMISED than a 1/4 w/l vertical of the same height fed against a less than perfect ground. Let’s face it, MOST amateur’s ground systems are mediocre at best. Also, the dipole is easier and cheaper to rig, and is two dimensional..Very important in my situation, as I cannot run out radials on my neighbours property.  Or, to quote W4RNL..

“Since only a handfull of hams can ever have 160-meter antennas high enough to yield a low angle DX signal, more practical are vertical arrays such as yours.  Vertical dipoles with hats (or Tees) save a plethora of wire needed by monopoles.”

Tom W8JI in a mail to the Topband reflector on the subject of small antenna efficiency, sums it up neatly….

“The most efficient way to build a small antenna is to use as much capacitance as possible at the antenna ends, and to keep the high voltage areas away from earth or lossy media.
It is always a tough project to build an efficient small antenna, but the bottom line is you want the highest current over the largest straight area possible and the open ends away from things that might be lossy. Using high Q coils can actually be much more efficient than folding wires, but gives less bandwidth. Capacitance hats at the open ends  always help bandwidth and efficiency.”

Being two dimensional,  I can rig the dipoles along my fence line, and this leaves the original site, complete with it’s ground system , available for the use of my K9AY loops..

I’m now using 45ft dipoles. loaded top and bottom (cap hat wires) on 80 and 160m, suspended from a 60ft high timber mast, as in the drawing above.
I have done side by side comparisons with my Inverted L, and  various 1/4 w/l verticals that I’ve built. They compare very favourably indeed, with the vertical dipole usually a tad better than any of my 1/4 w/l verticals both on TX and RX.  For some reason, the dipoles are quieter on RX than the others…’dunno why…Not that it’s an issue here, as I use a K9AY on RX when the going gets tough..
The dipoles are much quicker to erect, as they’re only 2 dimensional (no ground system).  Mine are erected along the fence between two fields on my neighbour’s farm. Being no wider than the fence itself, the antennae do not interfere with the agricultural activities in any way. This means that my farmer neighbour is quite happy to let me put up as much wire as I like…( view to the West )

Because I live on the coast, we get strong winds in the Winter. To “streamline” the antenna, I now feed the dipoles at the base of the vertical wire.

IMPORTANT… Because the dipole is now fed asymetrically, we must use a good choke balun at the feedpoint.  At these frequencies, we must use a high permeability ferrite core. I use a FT-240-61 core, wound with as many turns as possible of RG58 coax ( I think I got about 12 or13 on mine). Wind on about half the turns, then cross to the opposite side of the core, and wind in the opposite direction for the remaining turns.

If you’ve got any large ferrite cores in your junk box, and you don’t have a clue what permeability they are, here’s a quick check that I use.

Wind two tight turns around the core with insulated wire.. Connect the ends to the antenna socket of your Antenna Analyser (MFJ 259 etc)  Switch function to read inductance, and set the frequency to somewhere around1.8mHz.

If the meter reads any value of inductance, then that core is probably useful down as far as 160m.   I also use the same method to check small cores for use as 9:1 traffos for a Beverage, K9AY etc.

Here’s a quick way to check a choke balun. If  flopping the cable around on the ground, or handling the bottom end of the choke has no effect on the SWR, then it’s probably working effectively. If the SWR varies with this treatment, then it’s NOT working properly. 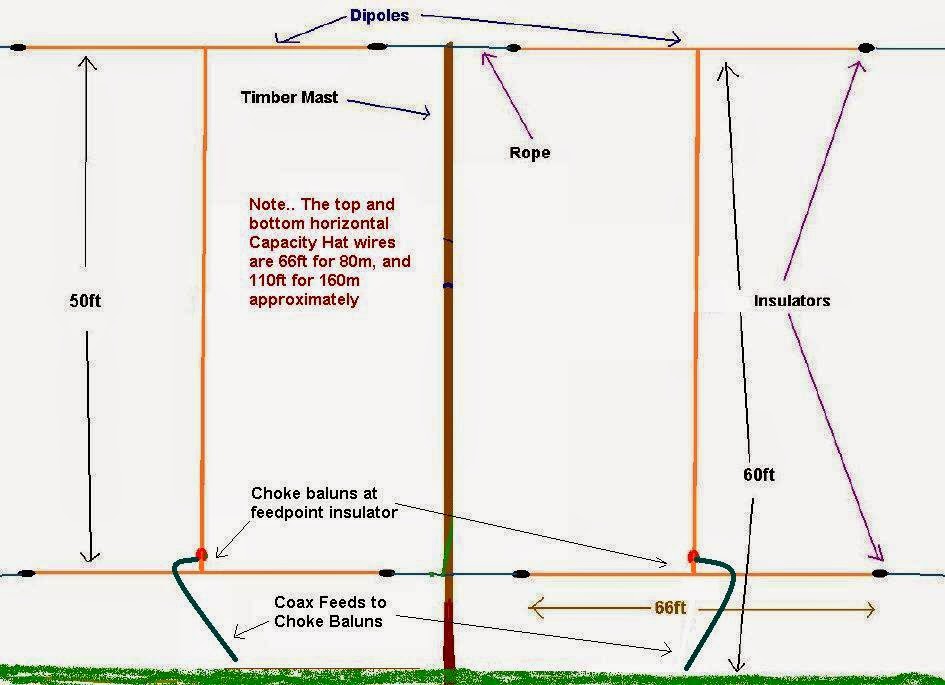 On the commercial front, Force 12 have stirred up quite a bit of interest with their  Sigma Vertical  antennae. This antenna looks uncannily like the vertical dipoles that W4RNL has had on his website for years. Take a look at what they have to say about vertical dipoles..

Their 80m Sigma has a 36 ft vertical section, has a 70kHz SWR bandwidth, and I’m sure it is an effective antenna. If you’ve got a handy 50ft or higher tree on your property, the wire version should cost  $50.00 or less, and with the higher vertical section should be even more effective..

The next modification that I intend to make to my Vertical Dipole, will be to follow LB’s suggestion, and use extra vertical wires spaced about 4-6 inches. This should increase the bandwidth, and general efficiency (less resistive losses) of the antenna.

My RX Antenna..
“On the low bands, the average amateur receiver has excess gain, and so a low-gain receiving antenna with a rear null is beneficial..  Not only does it improve the signal to noise ratio and remove rearward QRM, but it also reduces the occurrence of front-end-overload from QRM, QRN, and from nearby AM BC stations in the MF range.  Hence, gain must be tailored to the situation–which is not the same on 160 as it is on 20 meters. Pattern shape–both horizontally and vertically (i.e., the whole 3-D pattern)–becomes more important than gain itself.”

The above quote from W4RNL is an excellent synopsis of the requirements for good Low Band RX performance. For an “in-depth” discussion on the topic go to Tom W8JI’s website and read his Receiving section.

I do of course, use my TX antennae on receive also.. However, The single most important addition to my DXing armoury is definitely my K9AY loop array…

Gary Breed K9AY, did us all a huge favour, when he published that famous article  in September 1997 QST Magazine.  I could “wax lyrical”  about the effectiveness of this antenna, but I shall resist the temptation, as it has all been well covered before.. I will just mention that the K9AY is one of a number of  small and effective receiving antennae, such as the EWE, Flag, Pennant, K6STI etc. that have become very popular.

There is a wealth of information to be found on the web about all of these antennae , on some really excellent websites..   Your first visit should be straight to “the horse’s mouth ” at  Gary Breed’s K9AY site .  Other sites that you should visit include  Mark Connelly WA1ION  ,   Tom W8JI ,  Flag and Pennant Antenna Compendium ,    Hard Core DX ,  and   Wellbrook products to mention but a few..

I have made two physical modifications to the original K9AY design..

I have raised  the bottom of the loops, to a more comfortable height for lawnmowing etc.. and I have added a further two relays to the Control box. These relays switch in extra resistors in parallel with the main terminating resistor. This allows me to have optimum values for both 80 and 160m, without the complexity of controlling a Vactrol.

Just two examples of my experiences with my K9AY..

The 10th August 2000.. FR/F6KDF/T on 1.824mHz. Tromelein Island DXpedition. QRN S9 on the TX vertical. EU QRM almost crunching the front end on my FT1000MP.. Absolutely no copy on the DX at my end. On switching to the K9AY Loop, the QRN dropped to perhaps S5. With the null pointing at EU,  FR/F6KDF/T is now readable.

I worked him, in spite of the competition from the EU “big guns” 5 5 9 both ways.

I’m not a contester, but I do like to give out as many “mults” as I can on the Low Bands. With the EUs in full cry, it’s very hard to copy Stateside on the TX antenna when the QRM is way over S9. On switching to the K9AY the noise level drops dramatically, the signals also drop a few S points, but with the extra 20/30dB null  now pointing at Europe, the Stateside stations, although weaker, are now “armchair copy”.

I do not mention Beverages, 4 square arrays etc on this page, as it’s aimed at the Amateur who has no possibility of erecting such large antennae.. I hope that it may give some encouragement to those who (like myself) have limited space and resources.

Self Supported Tower For Hams

Resizing Your Antenna for Another Band